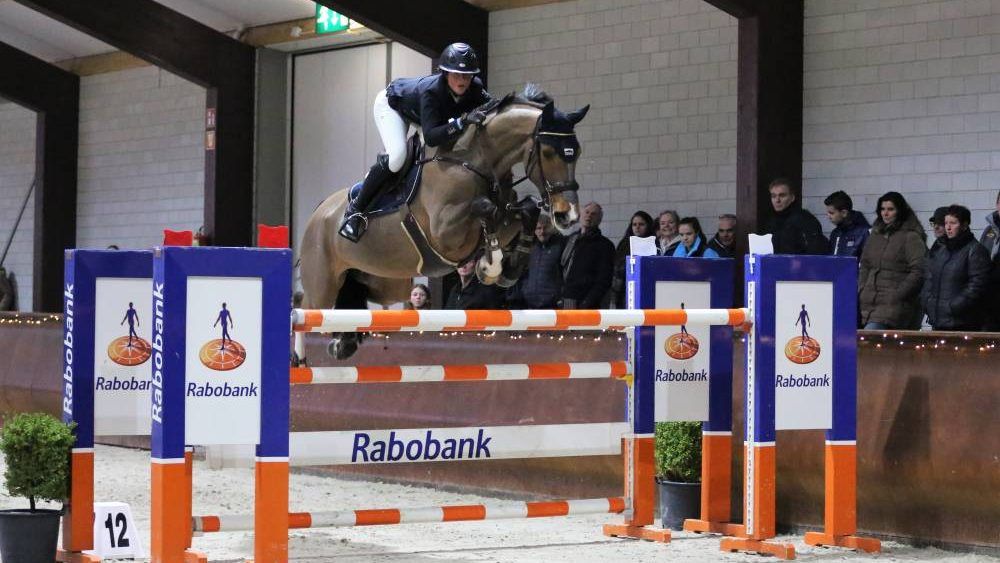 With 20% more German than Dutch riders in the January CSI it was no surprise that the victory in the Hansen Dranken Grand Prix on Sunday fell into the hands of a German combination. Katrin Eckermann took the lead with Dutch bred Dalien Swally RP, beating Swiss rider Emilie Stampfli to the punch. The rest of the top five consisted of German riders as well.

Of the 62 combinations in the 1.45m Grand Prix 15 got a return ticket for the jump-off. The second rider to go, Emilie Stampfli, finished with Flipper d’Elle-daughter Nikita du Luot in the time to beat in 35.42 seconds. Dutch riders, Tim and Michel Hendrix, tried to ride their mounts quicker through the finish, but the risk they took resulted in costly faults that placed them out of the top 10. For a moment it looked like Marlon Modolo Zanotelli was on his way to victory, but a untimely pole down caused him a second place in the final. Eckermann made use of the eagerness and power of her mare, Dalien Swally RP, and was able to stop the chronometer one second sooner than Stampfli.

Yet there was one Dutchman beaming alongside the arena. The breeder of Eckermanns horse, Reinder Pass, saw the Indoctro-daughter out of a Lupicor mare jump excellently and was rightly proud of his breeding. Also Katrin Eckermann was pleased with the willing mare. “My boyfriend bought her a year ago. She always performs to the best of her ability and is developing quite nicely. I do not watch any of the other riders in the jump-off on purpose. I believe I have to rely on my own plan and that proved to work out super here in ‘de Peelbergen’!”, says the happy winner, whilst referring to het earlier win on Saturday in the 1.40m class.