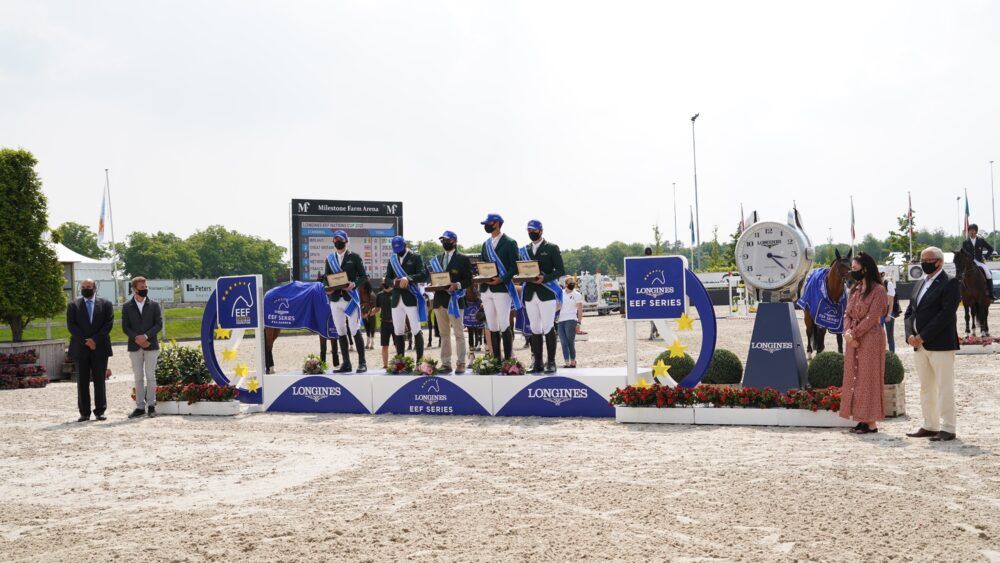 The Irish where crowned the winners of the Longines EEF Nations Cup at the CSIO3* at the Peelbergen Equestrian Centre this afternoon. In the second round the team of chef d’equipe Michael Blake made all the difference and kept Great Britain and Spain at bay. The Orange team with chef d’equipe Luc Steeghs missed the podium by just one time fault.

In the first round the Irish already showed their strength and the quality of their horses but in the second round they were truly unbeatable. Course builder Louis Konickx upped the game in round two by raising few jumps and the Irish subsequently made their play for the gold by finishing as the only team of which three riders jumped another clear round.

Excellent job
With the honors going to Alexander Butler with his mount Athene and fellow-countrymen Eoin Gallagher with Faltic HB and Eoin McMahon with Chacra. David Simpson was not quite on his A-game with Foudre F today, as a result his score was disregarded. “They are four strong riders, and they have four good horses. All of them did an excellent job. They also know I do not like finishing off the podium, so I am as proud as can be and it is an honor to be their national coach,” said Michael Blake at the press conference.

“We are very grateful to Longines for sponsoring this EEF Series. They are the ones that make it possible for us to compete here. With also my compliments to the OC of Peelbergen Equestrian Centre for organizing this event of relatively short notice.” Alexander Butler added: We will be reminded daily of this fantastic win by the Longines watches that we won today. All we have to do now is make sure we don’t scratch them.”

With the final Dutch rider in the second round to go team Orange still had a chance to score a place on the podium. Wout-Jan van der Schans was drafted last because of his experience, but with a relatively inexperienced but top jumping horse, A S Bombay, the veteran rider did not get into the flow that he did in the first round. “Wout-Jan’s horse is very careful and he touched fence number two very lightly. Then he got a bit nervous. The original plan was to ride a stride less here and there. Wout-Jan managed to do that well, but because of the tension they unfortunately got a pole down further on in the course and they just didn’t stay within the time allowed,” explains the Dutch national coach.

One time penalty meant fourth place for the team led by Luc Steeghs, who replaced national coach Rob Ehrens, who was attending the Nations Cup in St Gallen. Steeghs continues: “Apart from Wout-Jan, we only had riders with little or no experience in senior Nations Cups. For Kim Emmen and Jack van het Dennehof it was even a debut. A dream debut I can say. She showed that she can perform very well under pressure. And we have seen again that the difference is in the details. In this case a time fault kept us off the podium.”

Like the Dutch, the British and the Spanish also did not keep the slate clean in the second round. Both countries ended up with 8 penalty points. The British scored the faster times, earning them the silver. Spain had to settle for the bronze. France finished fifth, followed by Argentina, Sweden and Norway.