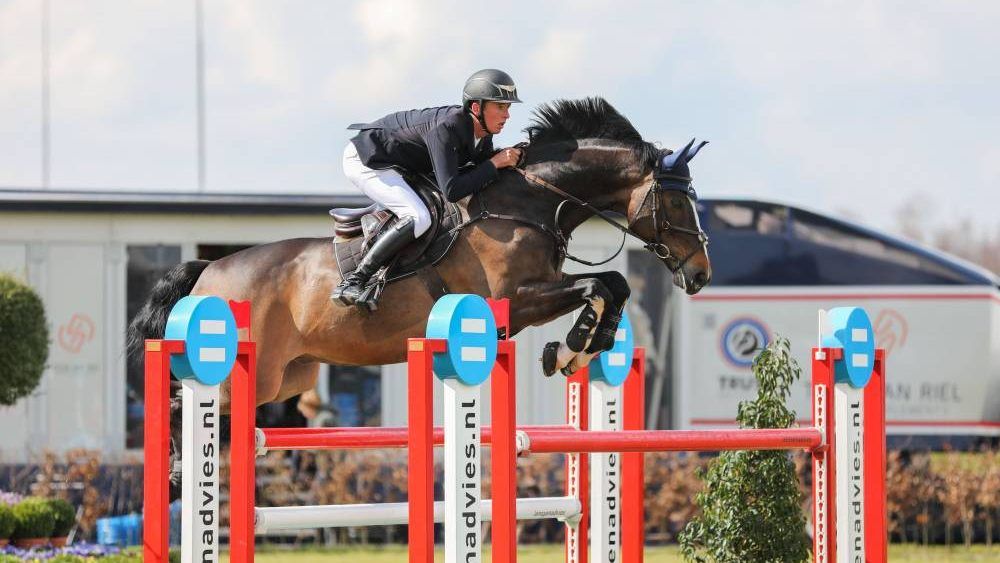 KRONENBERG – “Quite a cool line-up for a two-star Grand Prix”, Bertram Allen smiles after his winning ride in the 1.45m GP at Equestrian Centre de Peelbergen. The Irishman took the lead with his mount Gk Casper over German master rider Marcus Ehning and Italian top rider Lorenzo de Luca. Niels Kersten jumped to the best result for the Netherlands. With Can Win (by Canabis Z) he finished in sixth place.

With six riders from the top 20 of the world rankings present at the Spring Tour of CSI de Peelbergen, the audience eagerly looked forward to the Grand Prix. With the exception of Maikel van der Vleuten, all top 20-ranking riders took part in the 1.45m class. Alberto Zorzi and Scott Brash did not manage to score a ticket for the jump-off, respectively due to a time fault and two unusual poles down by Hello Mr. President.

13 combinations out of the original 58 made returned for the final test, built by course designer Henk Linders and his team. The ever friendly De Luca mounted de Flipper (by Flipper d’Elle) for the occasion. The Stephex Stables rider finished in 42.36 seconds after a daring ride. Ehning, in turn, took it up a notch with the powefull jumping Calanda (by Calido I) in 40.48. “I did see Marcus’ ride. He was almost two seconds faster than Lorenzo. So I knew what I had to do”, winner Allen looks back at the jump-off in which he eventually finished in 39.80. “Casper is so incredibly careful and everything turned out in my favor. That the three of us are on the podium today, is a bonus for everyone who made this show possible. Because to attract riders like us is one thing, but to have us keep coming back, is another and this is my second time here. For me this win is the perfect end to an already excellent weekend”.

From world stars to local topriders, all the riders were happy with the grass arena. “The footing was extremely good. Everyone talked about it”, begins Limburg rider Niels Kersten. “There has been quite a bit of rain in recent days, but this arena would have remained good even if it had come down pouring down. For me this was also a top weekend. To be in this line-up as number six, that is something to be proud of. My horse was in super shape, but because I have a three-star competition next week, I did not want to give it his all. This weekend is quite possibly the best CSI2* show I’ve ever had. I placed in both GP-qualifications with Can Win and also in the Youngster tour I was able to join the top six twice.”

The top five in the Grand Prix was completed by two Swedish riders. Evelina Tovek rode to place four in 44.35 with Mill’s Sheridan (by Empire). Malin Parmler, who lives in the Netherlands, finished fifth with Hopefull (by Mr. Blue) in 44.61 seconds.

For the full results: https://online.equipe.com/nl/competitions/23431