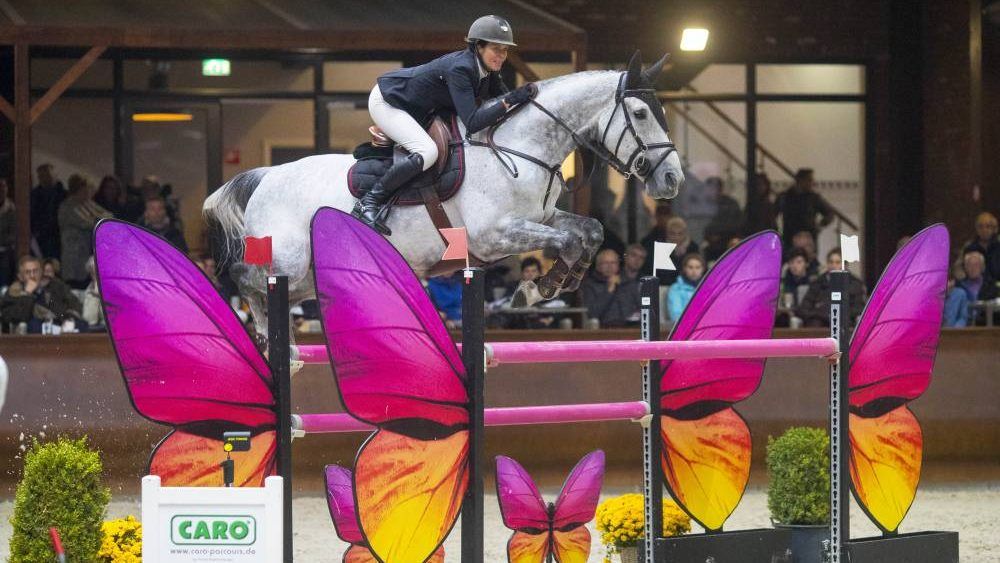 In the final of the Grand Prix at Equestrian Centre de Peelbergen the Germans proved no match for Ann Carton-Grootjans. The Belgian rider rocked the stage with her mount Funky Music (v. Vigo d’Arsouilles) and neatly beat the time of German rider Christopher Kläsener. The other riders in the top five all rode for the German flag, but the number two added a hint of Orange to the mix.

Nine of the 60 combinations were allowed to return in the jump off over 1.45m in Kronenberg. Only one Dutch rider had the honour of attending the finale in which the favourite showjumpers had to settle out of the top 5 and the winner triumphed in her second GP victory of 2016.

Hint of Orange Aniek Poels entered the ring with Barry White 3 (v. Twisther) when Elisabeth Kruse (GER) was still in the lead. The Dutch rider was unable to jump a clear round, but Ger Poels Horses, one of the founders of the ECDP, had another rider competing for them. German rider Christopher Kläsener has been riding for the trading stable in Swolgen for 1 year now and he was able to go clear with his mount Zippit. However after leaving the ring he already had his doubts about whether he would prevail. “I knew Ann would be fast and that made me take some risks. I missed one distance to the final vertical which made us loose rhythm and those very valuable 0,19 seconds. But Zippit jumped fantastic and it’s still nice to win second prize”, said the runner-up.

Wow After Kläsener  Ann Carton-Grootjans wet full throttle in the jump off with het eleven year old mare. In a virtually effortless ride and a sprint to the final oxer she finished in the fastest time of all. “During the course walk I thought the jumps were considerably high and the course was quite technical, but together with Funky Music I was up to the challenge. It’s the first time I competed at the Peelbergen and I have to say when we first arrived all I could think was: Wow. I right now I am thinking that all over again! The atmosphere here has been wonderful and the organizing committee handled everything perfectly. I already know I will be back again in November for the next CSI.”

Jack in the box A personal fan club formed for the last starter in the GP. Otmar Eckermann, father of Katrin Eckermann, has a glimpse of victory with his beautiful stallion Coco Bongo Boy. In an unprecedented time the German finished the course, but not before he heard the thud of the front pole of the final oxer take to the ground. With nearly three seconds less than Carton-Grootjans on the clock, but with four faults the dynamic duo dropped to fourth place.

The other winners on the fourth day of the CSI were in more than excellent shape. All riders already triumphed in the days heading up the final one, some even jumping to victory multiple times. For France this was Alexis Borrin with Utopia Montgothier, for Belgium Rik Hemeryck with Deesse La Sure and Turkish rider Ozgur Ozkan enven won two classes with Boncetto W and Claptonsz.