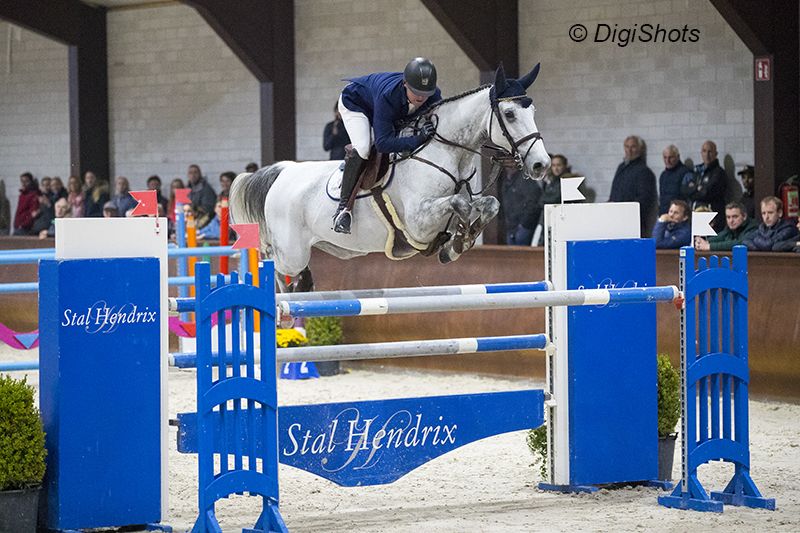 With a touch of luck Tom Martens triumphed Friday evening at Equestrian Centre de Peelbergen. With Ut Wodka he made it to victory in the jump-off over 1.45m. He beat Egyptian rider Abdel Said, who then had settle for third place due to a daring ride by one of the ECdP’s Founders Aniek Poels.

Tom Martens took the necessary risk and after two sharp turns the rider who owns Marlow Stables in Weert jumped the double with his grey mare whit luck was at his side. Ut Wodka slightly touched the back pole of the oxer, but it stayed up. “No one has ever won anything without luck “, says Martens jokingly.

“I knew it would be a challenge with so many clears. I do not always take risks, but this one paid off . This mare has a fantastic attitude and really wants to work for you. We come to the Peelbergen when there aren’t shows. Just to train and try out horses. I have some clients in China and if we buy horses for them, we always take them here. It is close to our stables and this way the customers can see how the horses jump in a different environment, which is perfect. ”

With Baggio Limburg rider Aniek Poels thankfully accepted congratulations for her second place, finishing just a bit quicker than Egyptian Abdel Said. Just under half of the 60 participants in the Stal Hendrix Prix earned a ticket for the jump-off, despite quite a challenging course. Course designer Henk Linders explains: “We had a lot of good combinations. The outcome might have been different with another choice of jumps, but the level of what we’ve seen here tonight is very high. Sometimes you get lucky and sometimes you don’t. That does not only apply to riders, but also to course designers”.

Other winners on the third day of competition at the Equestrian Centre de Peelbergen in the CSI ** & Youngster Tour were: German Tobias Meyer with Avanti, American Connor Husian with Betina and Dutch rider Joy Lammers with Froukittaire.