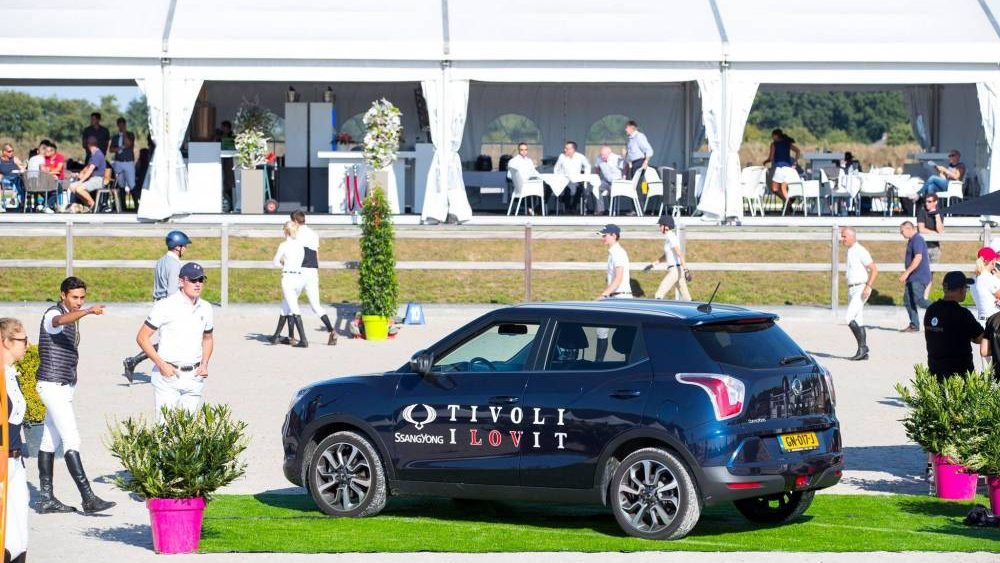 In a showdown that will be remembered for quite some time Britton Joe Whitaker was able to keep home rider Vincent Voorn at bay. In the Ranking class on Friday Whitaker  and his fantastic mare Lola V were able to finish three seconds ahead of Voorn and his ride Quinlan. In the jump off on Sunday Voorn shifted gears even more, but could not meet Whitakers time with 0.78 seconds. “Now it’s no so funny anymore”, jokes Voorn whilst congratulating the winner of the Grand Prix.
The Machine
Homebred Locarno-daughter Lola V made heads turn with her athletic ability and speed, but the mare was not the only horse that gave a performance fit for the finale of the Hansen Dranken Prix, the final class of the **CSI at Equestrian Centre de Peelbergen. 15 of the 59 combinations made it to the jump off that kept all spectators on the edge of their seats.  Joe and Lola first trumped the leading combination, Pieter Keunen (NED) and Alban with a time of 29,73 seconds. “I was only stearing, Lola is the machine,” Joe explained to the audience in the prize giving ceremony.
Just not in time
Stephanie van den Brink and her mount Merida showed great potential, but  eventually did not make it up higher in the ranks than fourth place. Consecutively Kuweiti rider Ali Al Khorafi made an impressive attempt to beat Joe’s time with his horse Cheril which earned him the bronze placement. Last to go Vincent Voorn was last but not least, earing siilver for the second time. “The turn to double is where Joe was faster than me,” says Voorn. “However I am happy with my second place. After I’d seen Joe’s round I was quite taken aback. So fast and what a time to beat! But I’ve now come closer than on Friday, so who knows maybe next time I will beat him”.
Hattrick
Dutch rider Pim Mulder scored a hattrick with Ecanto J. The Canturano-son jumped to his third victory in the 7-year-old final, leaving his rider with nothing but smiles, hoping this would only be the start of a very successful career for the brown youngster.

Sunday’s other winning teams
Dave Maarse and Finesse B skillfully took the lead in the final of the six-year-olds. And there was a nice end to the show for Liza Tiebot, winning the CSI1 * Liberty Prix with C’est La Vie. Marwin van den Nieuwenhuijzen triumphed in CSI1 * consolation final with Eton, just like Belgian rider  Henry de Wulf in CSI2 * consolation final with Zypria Adelheid .